Whilst on a trip to Bath recently I dipped into the Holborne Museum, a stunning Georgian building that used to be a rest place for visitors to the adjacent Sydney Gardens, but which now houses a collection of 18th and 19th century paintings as well as silver, porcelain and other items. They also have temporary exhibitions on the top floor and we went to check out the Edouard Vuillard exhibition currently showing.

Vuillard was one of the leading figures in French art at the end of the 19th century and he is known for his small, subtle studies of figures in interiors, often intimate in subject matter and intense in colour. This exhibition celebrates the uniqueness of his early work in which he balances patterned fabrics and wallpaper with subtle, domestic dramas. 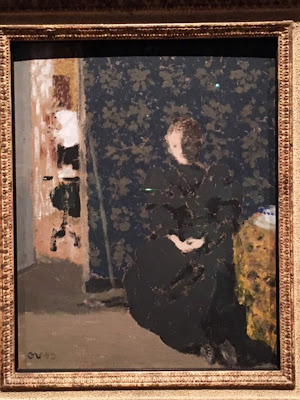 This painting shows Vuillard's sister sitting quietly while his mother is busy in the background. The broom leant against the wall suggests that the sister is taking a break from her chores. Her blue patterned dress almost disappears into her surroundings. Vuillard was attracted to the impact that patterned wallpaper (which was very popular at the time) could have on a picture. 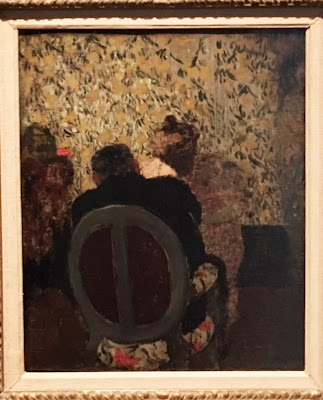 This painting is titled 'The Manicure' where a male figure is seated in an armchair while a standing woman attends his finger nails. Vuillard often painted figures from behind, as if we have intruded on an intimate scene. The light is trained on her activity but also casts a glow across the decorated wallpaper. 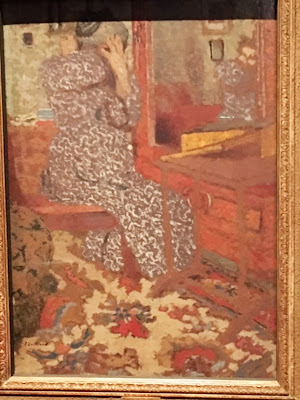 This painting shows Vuillard's mother (who he lived with) arranging her hair surrounded by the bold patterns of a Turkish rug and the pattern on her dress. The choice of showing her from behind creates a sense of intimacy. 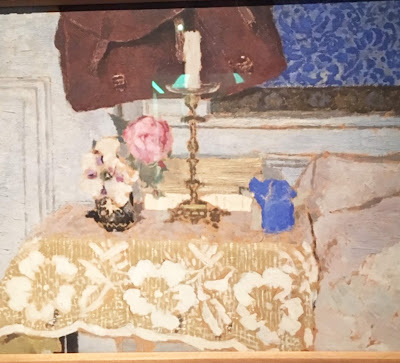 Vuillard found beauty in everyday details and this painting clearly shows this with its use of images. The blue of the wallpaper and the pink of the rose contrast with the white of the lace and woodwork. The saggy satchel in the background makes the setting even more informal. 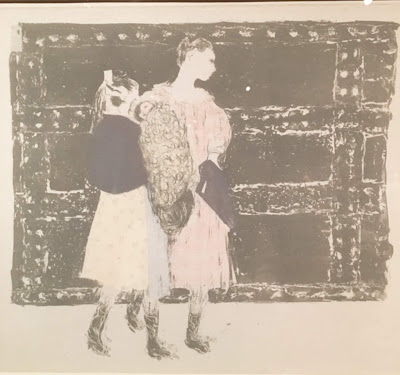 Vuillard was also a successful printmaker and in his prints he showed similar concerns with pattern, colour and form. I was struck by how modern his prints looked and love the soft colouring and loose technique used in the image of the girls above. 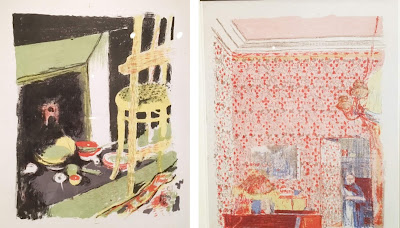 In his printmaking he still uses interesting angles to show his subject matter. The image, above right, is more concerned with the angle of the ceiling and the pattern of the wallpaper than the figure in the bottom right corner. 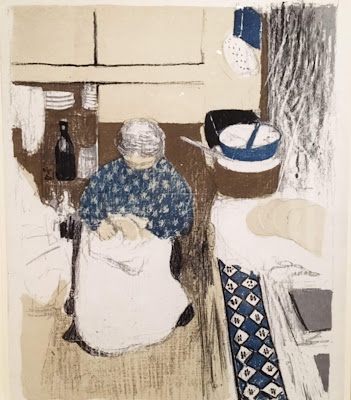 This print, titled 'The Cook' shows her from an angle as if we are looking through the door at her as she does her chores. I love the texture of the print and simple use of colour.

When you look up close you an see the use of texture Vuillard chose. 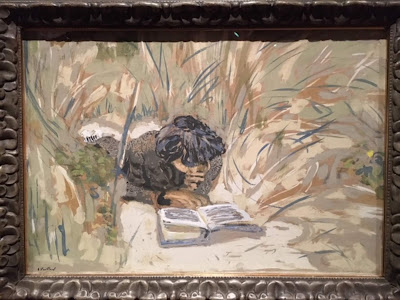 This painting of a woman reading in the reeds was my favourite painting in the exhibition. I love its unpolished feel and the loose technique. The paint was rapidly applied to create a spontaneous feel and I love the way that the background colour of the board comes through.

Look up close and you can see the tweedy texture of the woman's clothing. 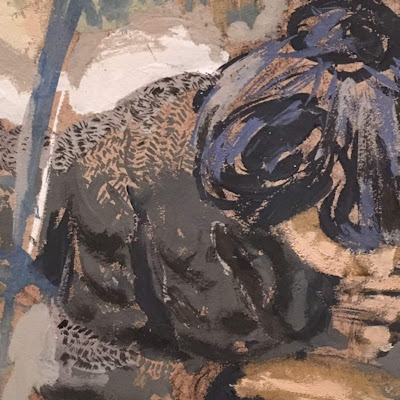 This small but wonderful exhibition is on until 15th September.