I had the great pleasure of going to the highly anticipated Dior exhibition at the Victoria and Albert museum last week. The V&A has become well known for its impressive temporary exhibitions and I knew this one was going to be good! 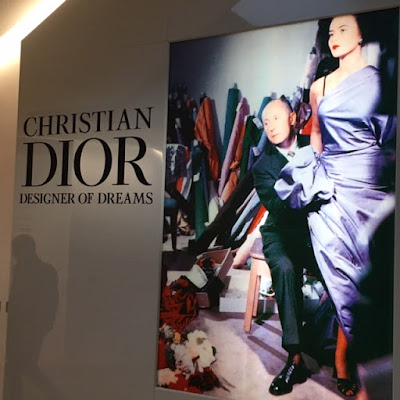 Dior's first collection was launched in February 1947 with the now iconic New Look which used a silhouette of full skirts and nipped in waists. This was seen as very extravagant at the time when rations on fabric were still in place. This was the outfit that opened the exhibition. 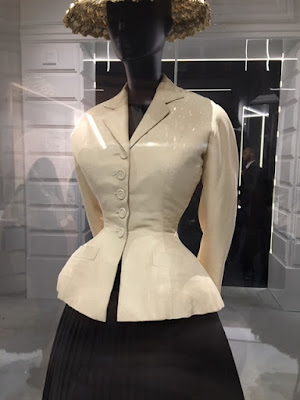 In 1991, when John Galliano was designing for Dior, he created the outfit below which echos the style of the New Look, with a modern twist. 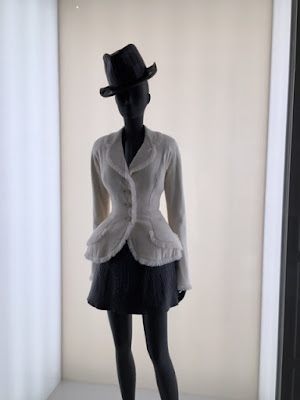 Christian Dior's designs played with structure and proportion to create clothes that powerfully expressed an attitude. He carefully considered movement, with each garment needing careful construction and workmanship. 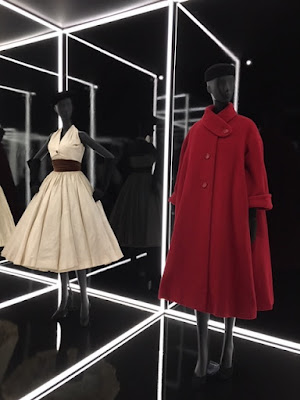 Continuity between collections along with headline-grabbing looks meant the sustainability of the fashion house. I love the simple drama of this stunning red coat. 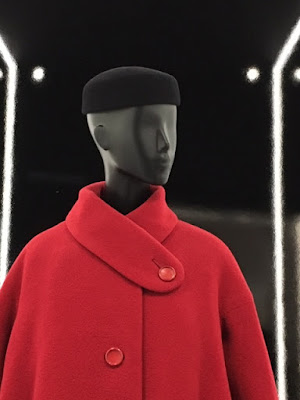 Dior often used historic references in his designs - the tight waists of the mid-19th century styles and the sumptuous silks of the 18th century. 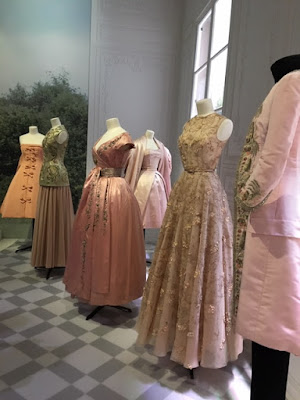 Many of the dresses created by Dior and his successors drew on the lavish style of the court dress worn at Versailles. The dress below, designed by Galliano uses gold thread, blue feathers and Swarovski crystals. 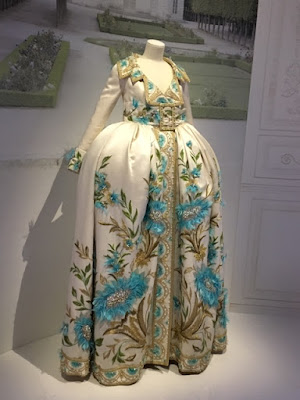 As a young man, Dior travelled a lot and from the launch of his first collection he took inspiration from the architecture, landscapes, art and textiles or different countries and cities. 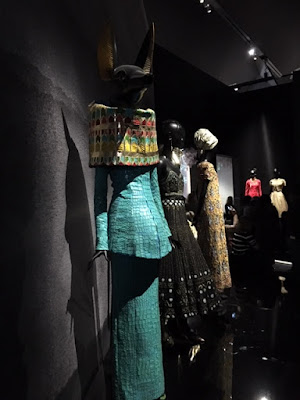 This outfit was inspired by Egypt and uses pieces of turquoise leather to create a scale effect. 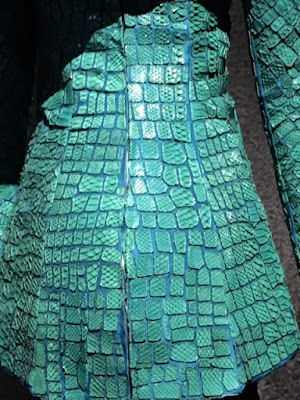 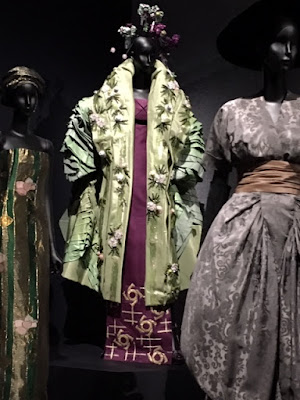 Asian countries also influenced Dior, from Japanese kimonos above, to Chinese silks below. 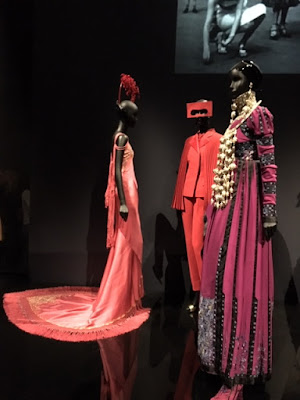 I love this stunning red coat designed by Raf Simons. The style is a nod to the full skirts and nipped in waist of the New Look and uses the colour red of the coat from his first collection. I love the inclusion of the ultra modern metal belt. 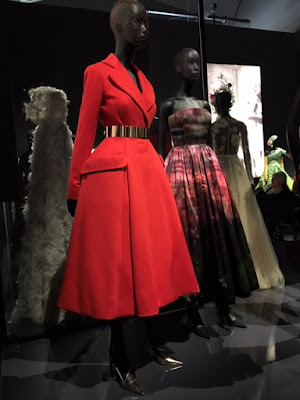 The outfit below uses a special technique to concertina the fabric of the skirt into tiny pleats. 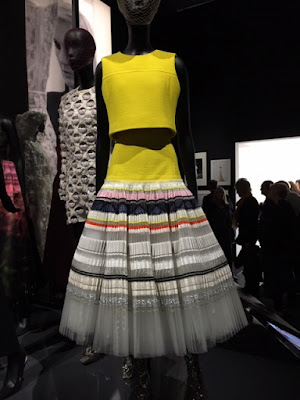 The bow on the outfit below, designed by Gianfranco Ferre, is stunning. No need for bright colours as it speaks of itself. 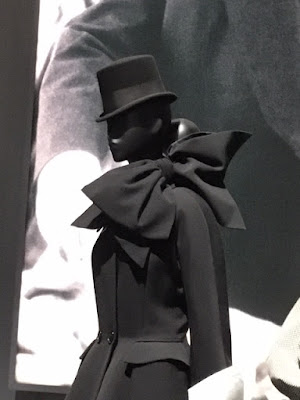 The ateliers, or workrooms, are at the heart of Dior and it is where ideas are turned into exquisite haute couture designs. Once a design has been selected, it is taken to the atelier where a toile was made. This is a prototype garment and is usually made in white cotton fabric. This is when the fit and proportions etc are irned out in the toile garment before the real garment is made and this room in the Dior exhibition showed a number of toiles. The toile below shows an intricately folded collar design with a hand drawn floral motif that has been pinned over the top to show where embroidery detailing would be used. 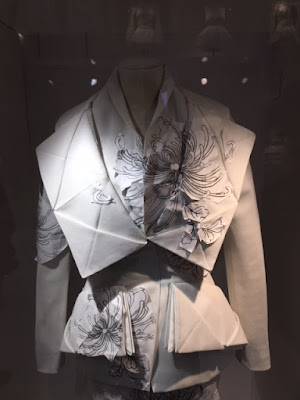 The purple garment below is the finished item. 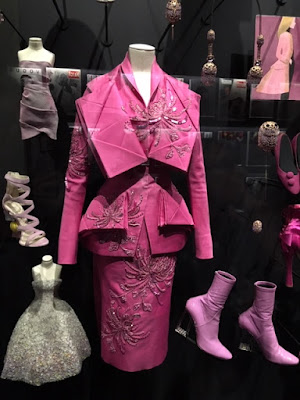 The final room in the exhibition is called The Dior Ball and showcases what Dior does best - evening dresses. Throughout his career he enjoyed designing clothes to be worn at balls and fancy dress parties where he could indulge his imagination and show off the skills of the haute couture ateliers. 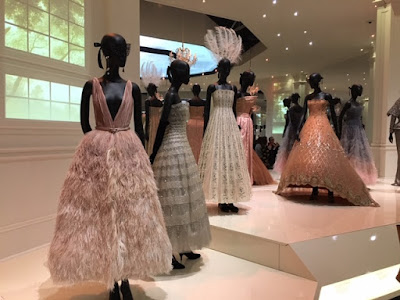 His extravagant creations combined skilful draping, intricate embroidery and stunning embellishment and he loved a bit of gold! 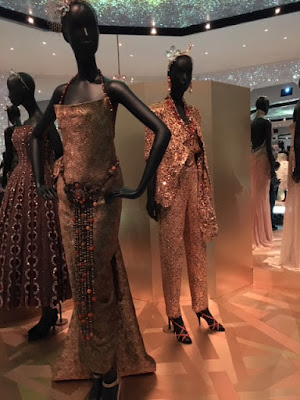 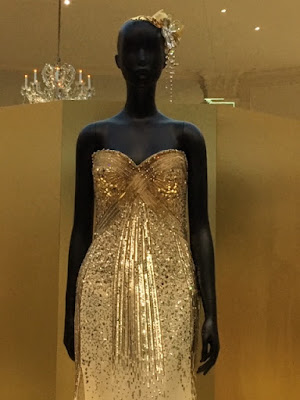 Dior's successors have continued the excess that has become synonymous with the fashion house. 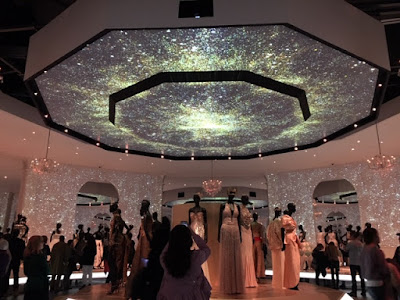 All these creations are housed in an ever-changing light show where day becomes night and opera and classical music set the scene. 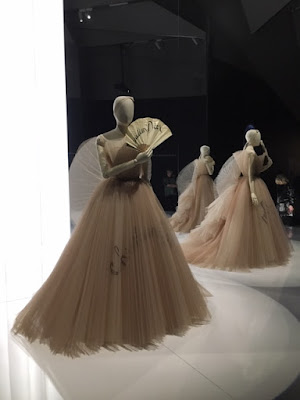 The final creation in this show is an ethereal gown which sums up the style of Dior.