Happy Monday! I hope a good weekend was had by all. My weekend was great, starting on Friday with a cultural trip to the David Hockney exhibition, something that I've been meaning to get to since it opened at the beginning of February. It's on at Tate Britain in London and shows quite a cross section of his abilities. The exhibition spans almost 60 years of Hockney's art ranging from his classic early paintings to the iconic swimming pool paintings and beyond. I was struck by the variety of styles and media he has used over the years. 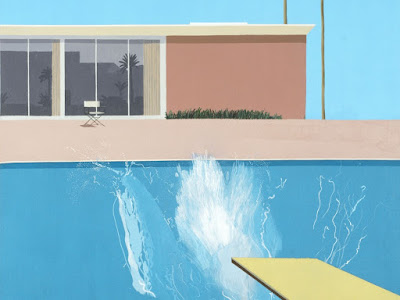 One of my favourites is 'A Bigger Splash' (above), painted in an abstract style and in simplified forms. It captures the heat of the day and makes you want to jump into the cool turquoise water. 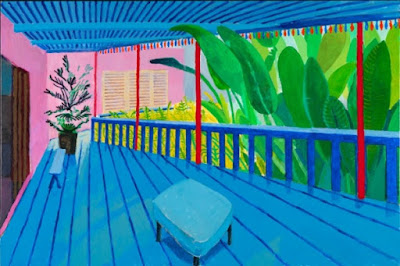 I also loved the paintings he created of this beautiful blue veranda, on his return to Hollywood in 2013 after living in Yorkshire for seven years. You can almost feel his relief to be back to the sun and heat of LA in his use of colour. This is shown in the same room as a series of pencil drawings he did of a Yorkshire country road and is quite a contrast in colour and feel! 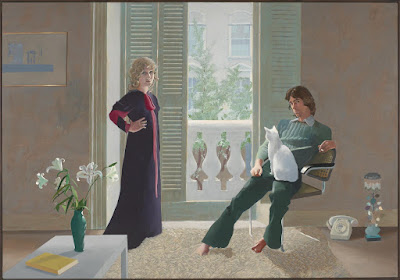 One room of the exhibition was dedicated to double portraits, many of whom were close friends and acquaintances of Hockney. They are immense pieces, almost life-size, and very engaging. Hockney was interested in capturing the intimate and often complex relationships between his subjects. 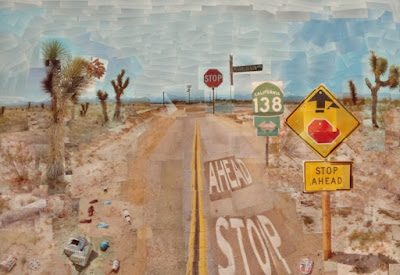 Hockney experimented with photography but instead of using one shot to convey his image, he started using a series of photos to create a montage, which gave him multiple viewpoints of one scene. My favourite was this one above, a landscape which shows a barren road in America. 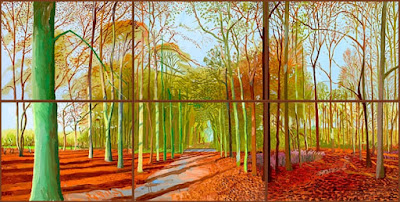 When Hockney returned to Yorkshire in 2006, he started painting views of the local landscape, often using a series of canvases to create one picture (above).

One of the final rooms had a wonderful display called the Four Seasons which showed slow-moving film footage of the same path in Yorkshire during different times of year. It really was mesmerising and not something that can sadly be summed up here. Go and see it for yourself, it's well worth it!