I'm still reeling from the news that Prince passed away yesterday and can't quite believe it has happened. Like millions of people around the world, I have been remembering the concerts I went to and listening to his amazing music that has been part of my life since my teens.

I first really fell in love with Prince's music when I went to his Lovesexy concert in 1988. I never really appreciated his skill as a musician, dancer and all around performer until I went to see him then, and that did it for me! I have amazing memories of chasing Prince around London in 1990 during his Nude tour, with my dear friend Katharine. We went to see him four times that summer, and in between concerts, we chased him round London in my little red Mini. The first time we did it was after going to a Prince appreciation night at the Hammersmith Palais, where Prince turned up! When we realised he was leaving, we decided to jump in my Mini and follow him. His driver soon caught on that a red Mini was in hot pursuit, so he sped up, and so did we.... We ended up on a high speed chase round the back streets of London, until they came to a tiny nightclub on an empty street off Conduit Street. No one else was around part from us and Prince's car, and there he was, stepping out of the car and into the nightclub. Somehow we managed to blag our way into the club, where we were surrounded by famous people - Mick Jagger, Stephen Spielberg, Michael Hutchence. I remember feeling completely out of my depth and like a rabbit in the headlights, but it was an amazing experience as well. Prince was sitting in a dark corner, observing the scene around him and surrounded by beautiful women. What a wonderful summer!

In memory of His Purple Highness, I have made a pretty purple clutch bag, using kimono fabric from my collection. It's a stunning colour and very befitting as a memorial to the great man. It has a pretty chrysanthemum motif woven into it and I decided to add a lilac cotton lining to compliment the outer fabric. You can find it in my store here. 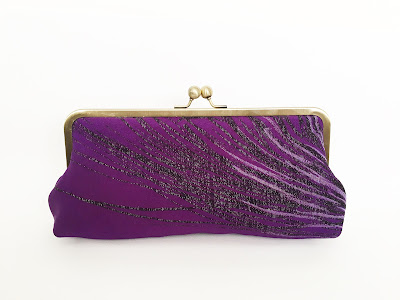 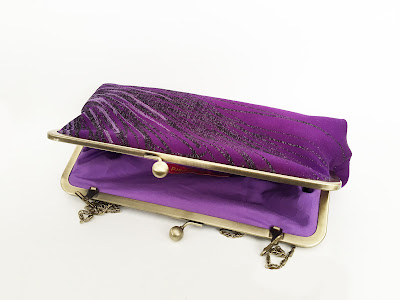