On Friday I went to the Liberty in Fashion exhibition at the Fashion and Textile Museum in Bermondsey. It's been on my to-do list for ages and finally I made it there! The exhibition celebrates the 140th anniversary of a company that had a massive impact on British fashion as well as being an originator of key trends. 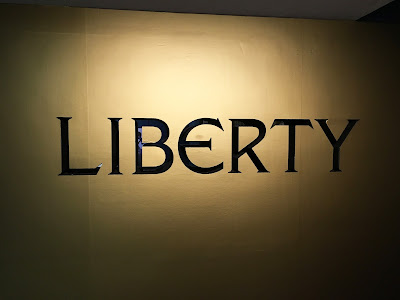 Liberty fabrics are known the world over and have been recognised as the leader in floral, paisley and patterned prints. Their most characteristic are the Tana lawn cottons - named after lake Tana in Africa where the cotton was originally made. Liberty have their own in-house design team who recreate the original designs in new colours as well as adding new designs to the collection which compliment the traditional designs. 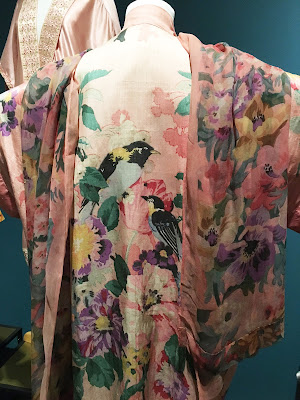 Arthur Liberty started the company originally as a warehouse supplying fashionable goods from the Far East. The opening up of Japan in the 1850s meant that the Japanese look became a popular look for Liberty, who took inspiration from items such as the kimono, for dressing gowns and wraps. The pretty pink garment above uses a kimono shape and has an Eastern-inspired image of birds and flowers printed onto it. 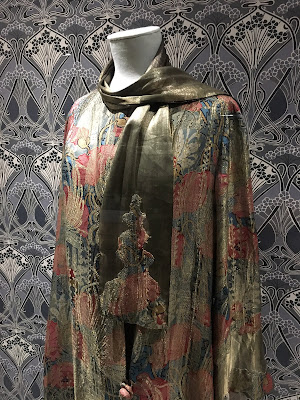 Liberty was friends with many artists and intellectuals of the Aesthetic movement, which used a fluid, romantic way of dressing. The garments of the East suited this loose style. I love the colours of the dress above, set against an iconic Liberty print wallpaper. 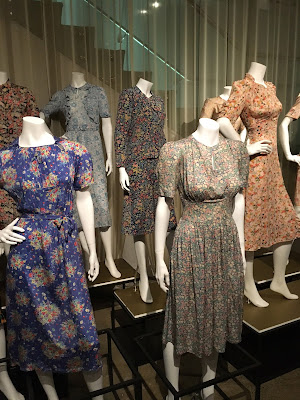 Before the First World War, Liberty began producing delicate floral prints. Prints on dark grounds in the 1920s then moved on to prints on light grounds in the 1930s to reflect the romantic mood of the era. This mini floral is still seen as the quintessential Liberty print today. 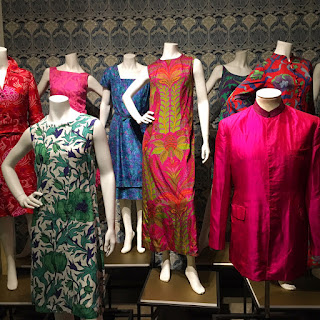 From 1958 to 1960 there were a series of Art Nouveau exhibitions which brought the style back into fashion. Liberty realised the potential of his Art Nouveau archive and commissioned designer William Poole to redraw original Art Nouveau patterns in vivid shades. This was one of my favourite sections of the show as I love a bit of colour! 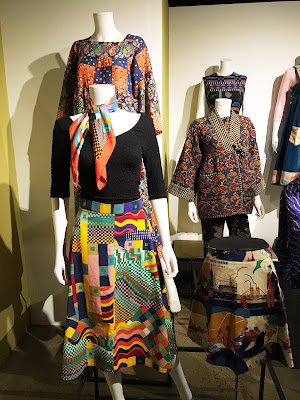 Design duo Collier Campbell were two of many designers who collaborated with Liberty. They applied their vivid colour sense to this skirt design, as well as many other fabrics used for fashion and home furnishing. 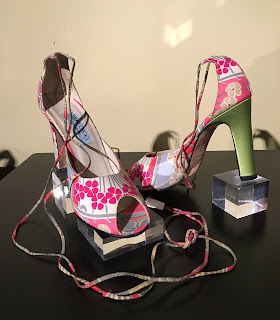 These Jimmy Choo shoes work perfectly with the delicate Liberty print. Check out that green heel!