A recent visit to the 'Fashioned from Nature' exhibition at the Victoria and Albert museum was very inspiring and insightful as it covers centuries of fashion that has been inspired by the natural world. It also shows how the fashion industry has plundered the natural world, to devastating effect. It includes stunning embroideries, intriguing techniques and beautiful prints and leads to a slightly uncomfortable feeling where you are appreciating the fashions of the past but also realising the effect that they have had on nature.

The silk dress below is from 1733 and uses a stunning print inspired by nature, depicting fantastical, over-sized fruits and flowers. The white ground sets off the vibrant colours. 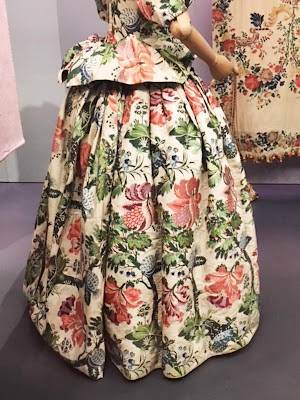 The exhibition continues through to the 18th century where manufacturing came into mass production and shows the principle fibres being produced at that time (flax, cotton silk and wool) and how they were made. It also shows how man's greed for feathers, furs and even bones - such as whalebone that was used for corsets - was incorporated into fashion of the time. The dresses below use pretty floral prints but also show how much fabric was used in a garment. I was intrigued by how much fabric could be gathered into such a small waist. 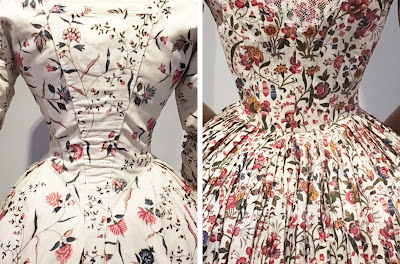 The international trade in exotic materials such as feathers and fur increased dramatically during the 19th century and London was a hub for the sale of both. Concerns about the brutality of the trades meant that local campaigns were established to oppose the trade. 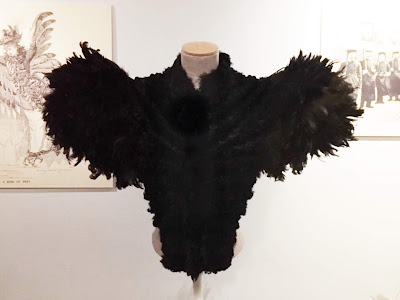 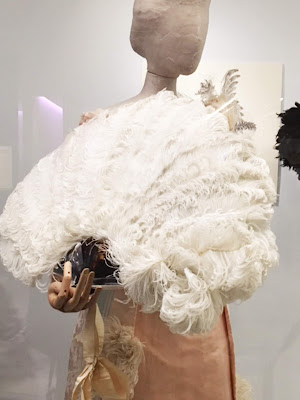 Colour plays a large part in the novelty and change of fashion and raw materials with natural beauty were prized for clothing and accessories. The earrings below were made from the heads of Honeycreeper birds, and were very popular in the late 19th century. 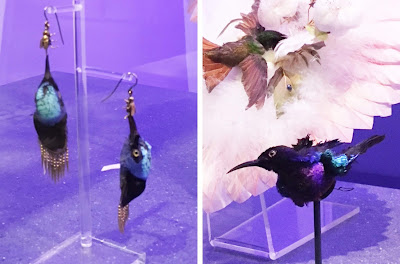 Among the many birds imported to ornament dress, the ones with iridescent feathers were the most desirable. Peacocks, honeycreepers and hummingbirds had stunning natural colours that changed in the light. 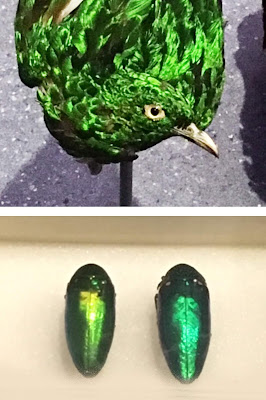 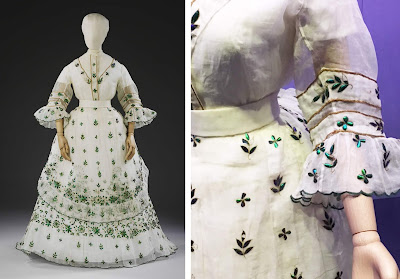 The starling on the hat below had its feathers added to with feathers from another bird to suggest a larger, more exotic species. On the right you can see an X-ray of the hat. 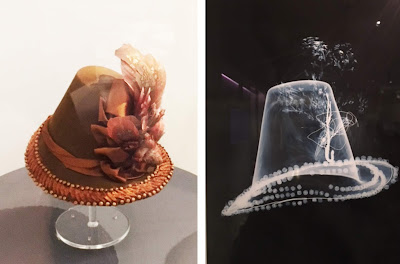 The 19th century saw new methods of transport and the spread of cheaper books and periodicals as well as the opening of museums which created greater opportunities for people to learn about nature. The book below shows a stunning imprint of sea life which would have inspired many textile designers. 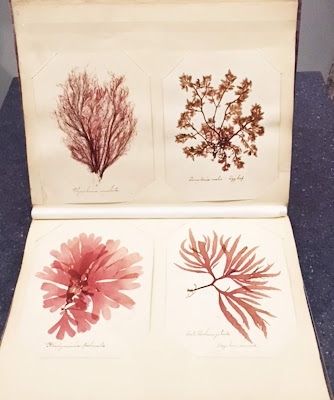 The fluctuating supply of raw silk meant that a search for man-made alternatives was needed. By spinning glass it creates a soft, fine flexible thread that only breaks when strong pressure is applied to it. Glass is cheaper than silk and the colours don't fade. It is also waterproof and fire-proof and was manufactured for furnishing from the 1830s. Below is a sample of a skein of fabric made from spun glass. 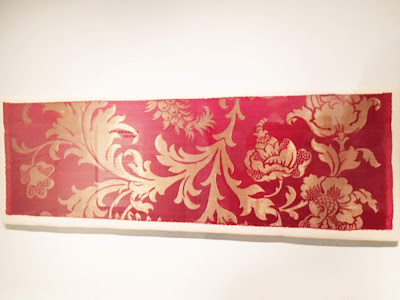 The exhibition continues upstairs where it shows how more modern techniques were used in the production of fashion as well as contemporary innovators who are directly addressing the issues caused by the fashion industry. The two dresses below were early examples of synthetic materials made to look like natural fibres, but they used harmful chemicals and treatments. 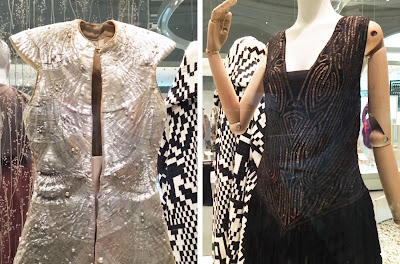 The dress below is designed by John Galliano and was inspired by Christian Dior's vision of women as seductive hot-house flowers.The garment uses a vibrant purple colour with red gloves and incorporates ruffling and tulip petal skirt. Even the belt and hat were inspired by florists materials. 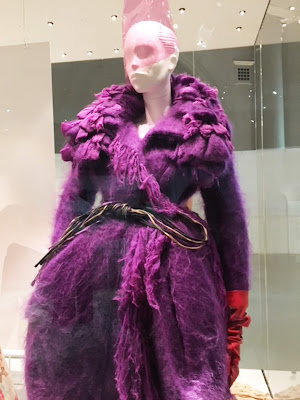 This Philip Treacy 'Windswept Veil' was inspired by high winds yet at the same time the feathers seem to grow around the head and form an organic green curtain. There is a stunning delicacy to it. 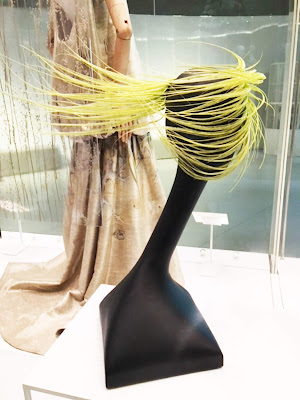 The dress below was designed by John Paul Gaultier in 1997 for his 'Russia Collection', and it appears to have a leopard skin draped over the front of it. But look closer.... 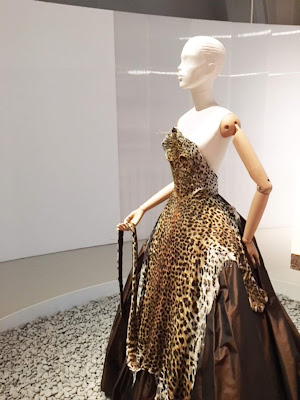 ....and you will see that the dress is made up of thousands of beads that create the leopard print. The gown took over 1000 hours to create! See how the head of the leopard creates the bodice of the dress. 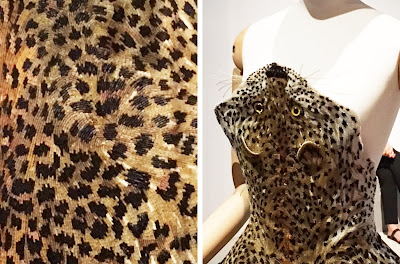 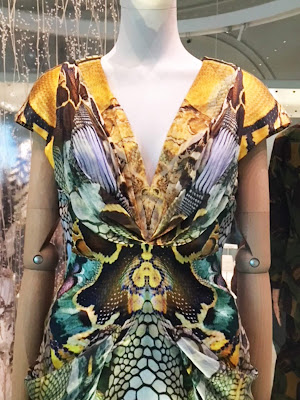 The Gucci handbag below uses a menagerie of creatures and includes a metal fox head and two stag beetles that have been silk-screened in gold onto calf skin. The designer was inspired by 'Theatre of Insects', a source book that inspired some of the 17th century textile designs. 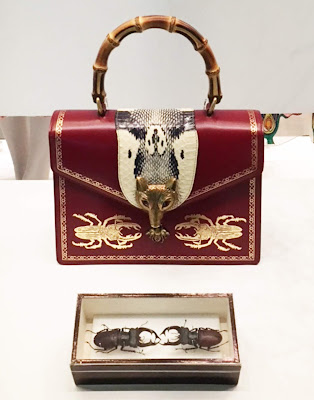 Designer Michelle Lowe-Holder sources end-of-line and vintage haberdashery to create her handmade jewellery. This dramatic ruff is made from end-of-line ribbon. 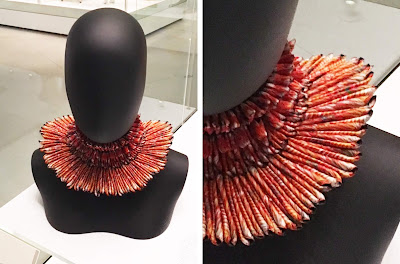 Scientists in Sweden and Britain created this wearable paper made from unbleached wood pulp, finished using natural dyes. Energy and chemicals are reduced at every stage. 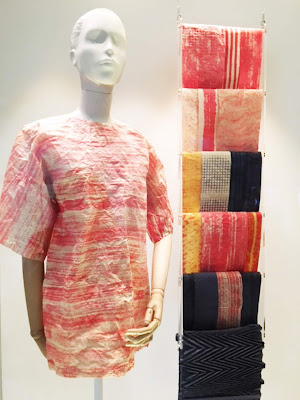 Diane Scherer trains the roots of plants to grow in intricate structures, creating a 3D textile. When the roots are fully grown, she removes them from the soil and cuts off the plant stems. See the dress below left and the process, below right. 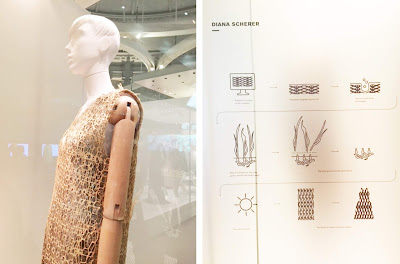 I highly recommend a trip to this museum to appreciate the good and bad side of fashion and to see how much we have progressed over time.